I was invited to lead a workshop by the  Toronto branch of the Anthroposophical society . I asked the Trees in Queen’s Park permission to bring my group to them. This is the report written by one of the organizers Grant Davis. I have been returning to the trees there and will scan and post those conversations in the near future.

On Saturday, June 7 2015, Elyse Pomeranz presented a workshop in Queens Park to a group of Branch members and friends. The event was organized with the support of Vivien Carrady. We were a cheery group of about a dozen including a child who likes to sing to trees, some adults who already have connections to trees , and some for whom this was quite new. Following a round of introductions, with Elyse’s direction, we split into smaller groups around three of the oldest trees in Queen’s Park. I led my group through David Spangler’s Standing Meditation as a warm up as it seemed very related. The groups then greeted the trees , following Elyse’s recommendation that we do this with our backs to them. Then , as we sat there, using the paper, paint sticks and water pens, we allowed images to come to us.

My experience was an immediate response from the tree. “Look down, below the ground. Turn your Standing message into UNDERstanding!” I received the impression of a large area of interest below the trunk (UNDER ground) and extending in all directions. I started to draw a person with branching hands and feet. Then I turned it 180 degrees and drew the ground level. The tree has its head in the ground! Steiner told us this and now the tree was telling me too.

This this space underground there is activity and communication. It became clearer during our gathering at the end where we shared our pictures and experiences. A slip of the tongue by another participant who said “soil” when she meant to say “soul” lead me to the realization that the soil ( underground) may be the area where the (group) souls of the trees are active. I was also pointed to a struggling little sapling that I now hold in my thoughts each morning. I hope to see some healthy growth when I next visit it.

This was quite an enriching experience for this “tree hugger” and I think for many of the participants. Thank you Elyse! 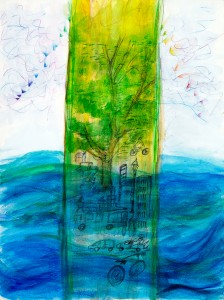 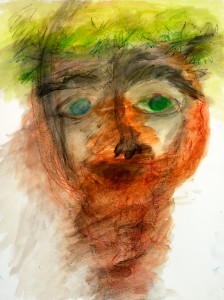 The face is the personality of the Red Oak and the drawing of the vertical column shows the function of the tree in the landscape.

On the second day working with trees in the Toronto area I went to a small but central park space called Queen’s Park. It is a boulevard with a green space dividing two streams of traffic. At the south end is the Ontario Provincial Legislature, on the west and east sides the campus of the University of Toronto and at the north end the Royal Ontario Museum and the Gardiner Museum of Ceramics.

I went to a large red oak. I felt it was the senior tree. I decide that I would do two parallel images , one of the activity of the tree in the landscape and the second of the personality of the tree. I would build them both up at once on separate sheets of paper. The personality is warm, wise and very gregarious-clearly. All the social activity, the movement of people, the conversations and many events that take place in the vicinity is something that the tree delights in. I noted the slightly ironic and funny coincidence that there was a small group of East Indian youth who were playing a small game of cricket right next to the tree. I seem to be very tied to all things British at the moment. Including the trees I worked with in London. 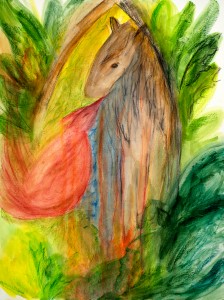 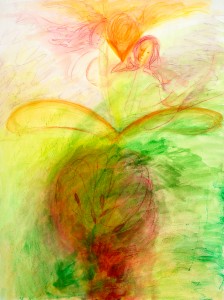 My first day out in Toronto I was working in the Beaches area. Qew beach and they were oaks that seemed very interested in the trees I had connected with in London. In particular the Brunswick Plane in Brunswick Square, Bloomsbury.

Back to the work in Queen’s Park. I had chosen to work on large paper. It takes much more time to build the drawings up ( I am it is an experimenting to see if I’d like to work large when I am on home turf ( ie Toronto) or stay with a smaller size paper. As I was working I saw two men walking around in the park and they stopped in front of me about thirty feet away. They began to do some kind of prayer/meditation/movement. I wondered if they noticed what I was doing-the quality of it, the intent, the mood, the ideas or intention behind it. Their energy and what I perceive in their movements of reverence, gratitude, joy and deep inner presence was so apparent!! Am I that easy to notice also?

They finished their exercise or ritual and laughed with delight then walked over to the red oak tree, standing on the other side. I felt something taking place. It changed the activity of the tree and changed my encounter with it in a subtle way. I could have continued what I was doing but it would have been to just continue to show what had already been communicated by the tree rather than having an ongoing exchange. I got up and walked around the trunk. I greeted the two men and we spoke about what we each were doing.

They were in Toronto to study with a Chinese master who teaches soul healing by doing very large gestural chinese brush paintings or calligraphy- One was from Zurich and the other was from Berlin. Neither had ever been in Toronto before now and it was their first time in Queen’s Park. And as for me, after so many years of living in Toronto (46 years)- and several years of tree conversations in Europe and New York…I chose THAT DAY to meet this tree in Queen’s Park. Marvelous. The Swiss man did “channeling” through the tree where the tree thanked me- it recognized that I’ve developed this spiritual work, that it will lead others to new ways of connecting- that I am on the verge of developing this further in terms of the painting but later suggested that it might include sound in the future? This makes me think of my wish to have a Hang drum to bring sound to the trees but that was thwarted and perhaps for good reason ( and I remember in Bad Meinberg a the LifeNet conference playing the single tone harps near an ancient tree…it was for the elemental beings but I felt the tree responding there!!). I could possibly bring the guitar? I stayed a bit longer afterwards working more. I had said to these men when we first met that we can each notice and remember that this kind of work is taking place all over the world all the time now. We are participating in a global human activity of awakening and creativity. Good to be reminded. The fellow from Zurich said I would always be welcome when visiting Switzerland.