I returned to this willow tree May 2015. Sitting with a friend and author we spoke about Shakespeare’s the Tempest. Freeing Ariel, a spirit trapped in a tree! And also she introduced me to a book by Iain McGilchrist called the Master and his Emissary. This is a turning point for me to examine the duality of left and right hemispheres. I see now that the tree drawings work to bridge these two polarized aspects of human experience. The rational, answer based, known, linear, information based aspect and the cyclical, holistic, question based, artistic aspect! In these two drawings I see geometry, mathematical imagery and there are also two circles intersecting ( the vessica piscis or mandorla a sacred image for the third principle that balances and relates the polarities of left and right!)

I was living in the house of a dear friend. My life was in transition and I was grateful to have a place to be during the harsh winter months. Also living occasionally in the same house was a gentleman, a retired professor of Physics. As we both went about our daily lives our paths crossed and conversations took place. It was interesting and lively. Eventually, after about five months having established a friendship he asked to see my tree conversations. 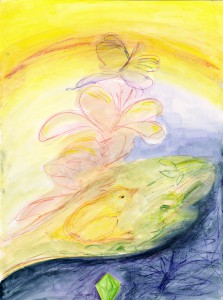 I was touched by his response to the work . He was moved and interested. We agreed to take a day to go together to High Park in Toronto to meet with a tree and have some conversations. He wanted to do an experiment where I would first have a conversation by myself with the tree and then he would join for a second conversation. I felt that one would suffice and he joined me, both of us leaning up against the same Oak tree and we went into silence for about 40 minutes. The drawing that came through is featured here in the body of the writing. I had asked for an image to come as a gift for him in these later years of his life (he was 84 years old). He expressed that he found, during his meditation, that he had some interesting inspiration and new ideas for some projects he had been working on for some time.

Afterwards this initial conversation I wanted to work with another tree in the park. I approached a group of three willows. They were quite exposed to the public picnic area and there were many people there, mostly immigrant families, celebrating Father’s Day having barbeque or picnics. There was a group of young girls ages 4-14 rushing about enjoying themselves calling out and chasing each other. It was a sweet soundscape in the background. I was focused on the drawing and listening. Then I noticed that things had become silent and I looked up to see that the group of girls were gathered around my tree conversation drawing and were looking at it intently.

They asked permission to take photographs of the two drawings. They asked what I was doing. I gave it some thought, pausing for a few moments. I described connecting with the tree from my heart, through feelings and then noticing if the tree responds. The oldest girl was fascinated. She related to what I was saying in terms of her experience playing music. She said “That is very spiritual…were you born that way?” I laughed and replied that I think I probably was born that way. We talked a bit more and then she said with great interest “Do you make your living doing this?” Again I paused before responding. “No, I do not make my living this way, but I LIVE BY it.” She nodded solemnly. We talked a bit more and then they went off to play. It echoed in me as a question: ”Do you make your living this way?”

And it echoes still. I have been taking steps to bring the work out into the world a little bit at a time and we will see if it becomes possible or not to make my living this way!