This park, Kennington, has a long and fascinating history. 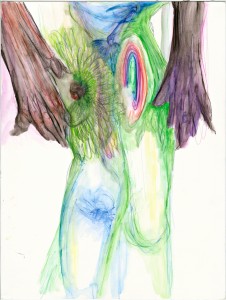 It was the site of public executions when these were still in fashion .In 1940 there were 105 people killed by a direct hit while they were hiding in a bomb shelter. I was first introduced to the park in May 2014 when I visited an apiary that is tucked away in the corner of the park. After visiting the apiary I walked in Kennington and noticed the trees that grow all around a large open playing field. I had the impression that these trees were a single group, collaborating to bring something important to the place. I did not know the history of the park but made a note that I would return when I could to work with those trees. 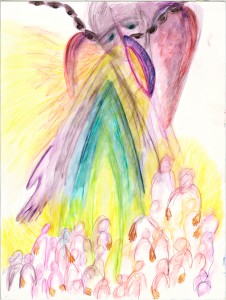 The process of forgiving: those who were killed in the bombing: the healing

In August 2014 I had the opportunity to return and so I spent an afternoon with three of the dozens of venerable plane trees that encircle the green. If I could, I would have worked with every single tree. I had the impression that the trees were all invoking peace and forgiveness. They each had a unique role they were playing in creating this opportunity and yet together, they could lift the experiences of the past to a new level of understanding and compassion. It would be interesting to record something from each tree! I felt that the work they are doing is not noticed but the area is impacted by their efforts. I also had the sense that human participation and witnessing and conversation is welcome and needed. When I stood on the field I was in a column of light and felt it was an entrance or doorway for healing.