I had joined a remarkable group of people from all over Europe for a day in Slovenia near the medieval town of Ptuj. There was a week long conference taking place based on the theme of the Parsifal legend. The story was being recited every day in English, German and Slovenian. I heard some of it told as I participated in two days of the weeklong event. On one of the days we were taken to  places where some believe Parsifal travelled. In Studenice, nestled in the mountains and valleys past storks roosting on the top of posts by the road we came to the Abbey, the spring and the castle ruins. Time contracted and expanded. I had to choose where to give my attention. What would I open myself to and what give up?

I drank from the spring first. It was fresh and potent and felt like light entering 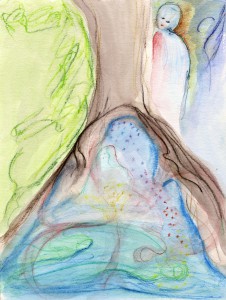 my body.  I knew, I must contact some trees. I separated myself from the group who went into the church and soon I heard singing streaming out from the entrance. Near the church was a small pond, the source of the spring. It was surrounded by a gate and inside the gate stood two Linden ( or Lime) trees. I introduced myself to both and one clearly invited me over.

Some branches could be touched in spite of the fence. I set myself up to begin. In between layers I went into the church to hear the singing echoing inside the walls. I knew I must climb the steep hill to hear the Parsifal telling and I reluctantly wrenched myself away from my conversation with the beloved Linden tree.

Carefully I ascended. On the way I passed other trees that I longed to converse with. I already wished I could be back here again for longer (one of the hazards of this work, the wish to have more time, work with more of the trees I find). Just as I was approaching the ruins at the peak I saw a rose bush. I will call it a wild rose but I’m sure it has a proper name. The colour was exquisite, breathtaking, peach, pink, coral, the colour of tender love. There was a fragrance enticed by the warmth of the sun into the air and I was touched right to my core. And in the centre of this flower was a honey bee, dusted in rose pollen. I had never seen a bee in a rose. This one was a perfect bee in a perfect rose, a rose in the fullness of blossoming . As I descended from the storytelling the blossom was already beginning to wilt and fade.I will remember that moment as long as I live. That is who I wish to be and sometimes, that is who I am.

I descended, rushing back to the tree by the spring in case she had something to add. She did not but I noticed that some branches of her brother tree on the other side of the crystalline pond had been trimmed and clinging to the branches were clusters of seeds. I had the thought that I might plant trees. I took some seeds from these pruned branches, with thanks.

There was a third Linden tree that was not flanking the waters and I felt I must, at least, have a brief encounter with this one. I entered in knowing there were no more than 15 minutes to departure. Immediately I encountered a festive spirit- a kind of “green man” being decked out it flowers and revelry. I did a quick impression and left, again, longing for MORE. I realized that might not ever be possible but I ached with longing to be allowed to return.

My host, Ursa, had been so generous and was beginning to be weary of all that my presence involved. She had set aside so many things to help me in my research. Even so she offered to take me back there on the eve of my departure as we drove back from a day in Maribor in northern region of Slovenia. Approaching the beloved Studenice we were stopped by some local residents who guided us into a tennis court that was serving temporarily as a parking lot. As it turns out we had arrived for the annual village festival and people were gathering for the celebrations. I was a bit uneasy immediately feeling that the private and intimate encounters I had imagined with my beloved trees would be impossible.

As we approached we heard music, smelled food cooking. The spring was surrounded by small vendors stalls selling crafts and local products of various kinds, the little pond was flanked by picnic tables with benches on one side and a full pig was roasting on a spit on the other and then there was my festive tree who I imagined continuing my dialogue with, around her trunk were chairs and benches of various kinds and the greatest concentration of villagers eating, drinking and enjoying the lively music and song produced by a marvelous band that included accordions, washboard (some version of it) a strange local drum and warm boisterous singing. So there it was, the activity that had what made my tree friend into who she is.

How could I have resented discovering this clear outer confirmation of my accurate and true perception that is illustrated in the drawing of the spirit/soul/presence of this tree.

In retrospect I was able to recognize that this second visit was a rare opportunity to experience how the activity of human beings, culture, festival could be expressed and described by a tree through a tree conversation in art!