I had been told about a tree on the hill near the castle in the capital of Slovenia, Ljubjliana. My teacher , Marko Pogacnik had identified this tree as connecting with a  presence of the pagan spirit “Pan”-the guardian and guide of elemental beings. I thought it would be very interesting to meet this tree and ask permission to have a conversation. My friend and host Ursa took me to the tree and I asked to approach. I was told that first I must meet ( and be veted) by another tree nearby. 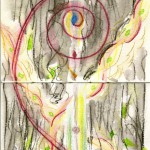 I began to work with the acacia tree that was indicated about 30 metres away. In the encounter I was lead into a realm that was generative, majestic and full of patterns and what seemed like jewels. As I worked the sun set and I felt it wasn’t possible to continue. I experienced the change that comes over a tree as the light fades and night arrives. Up until that point I had not yet tried to work with a tree after dark. As the light became dim I recognized that I would have to leave the conversation unfinished. When I did return I went back to the same tree and picked up where I’d left off. Once complete I asked the “Pan” tree once again if I would be welcome to converse. The tree granted permission and also kind of taunted me-warned me this would not be a “polite” visit. 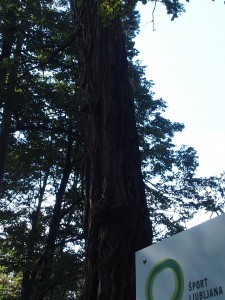 I settled myself as best I could. I was told to take off my shoes and place my pencils between my toes. Emphatically and impatiently, Now! So I did- again I was directed to working with my toes- I felt a kind of laughter-with a bit of a mocking edge in it but I followed the instructions nevertheless. Then I was permitted to use pencils in my hands but several at once and with my eyes closed. This I did. Finally I was directed to have my eyes open and I was shown the eyes and figures in the drawing. It was a very free, joyful, wild and merry jaunt. I was grateful. 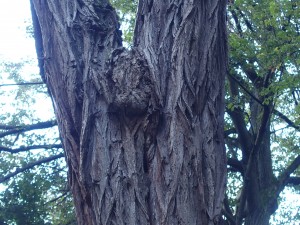 The mood of the drawing was mysterious and free. I returned a year later to both of these trees and again I began with the “attendant” tree and a rich and beautiful image came through that encounter- a kind of fulfillment of the first one- a true grail image with the aspect of the rainbow present. I felt that the tree was part of the “Radio Rainbow” network of communication. I also went back to the Pan tree and it was simply a messy, wet experience in which the first attempt was destroyed. 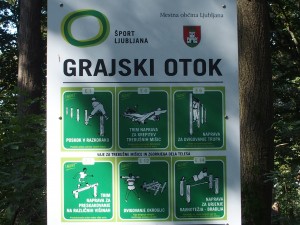 I persisted and there was a repetition or echoing of the first year’s image arising. I wondered if this kind of image simply IS the presence of Pan, consistently ? I did return a third year in a row to this same place although I only worked with the acacia/guardian tree. It was absolutely fascinating to notice that there had been a new structure built next to these trees. There was a vast amount of land where this play structure could have been imagined and constructed. These trees are part of large park/forest at the top of the hill overlooking Lubjliana where the castle stands and there are numerous walking paths and benches etc. I felt that this place had been chosen, whether consciously or unconsciously because of the playful spirit of Pan, living in the tree and present there!!!