I returned this year to work with this remarkable tree. I had a group with me. There were some very important themes that presented themselves in relation to new social communication and agreements. In particular there was a division in the group that had a strong emotional charge around the question of whether or not photographs would be taken, if, when , how and of who. This theme presented  ( humorously) again when we were sharing our conversations in a talking circle format and a man barged in unaware of the quality of our circle and at one point he asked to take a photo of us with the tree! Another tree joke! How will we navigate this realm of image making? A new social agreement required?

I was invited to go with a small group  ( See the wikipedia page and the legend that includes the signing of the Magna Carta and the first meeting of Anne Bolelyn and Henry VIII) to meet with the tree that was present at the signing of the Magna Carta. The other members of the group had been part of an international meeting in July 2012 at Emerson College in England. We had traveled together at that time to Glastonbury, Stonehenge and Avebury. On that trip I began the tree conversation work in earnest, meeting some exceptional trees including Magog in Glastonbury and the four copper beech trees at Avebury.

We met at the Wraysbury train station and drove together to find the path leading to this special  tree. There were no clear maps or signs but it was well known where the tree grew . I had forty five minutes to work on the drawing. As we approached the tree we passed many other trees that I longed to meet but I was aware that I simply must trust. I will work with those trees that are needed for this project and I won’t meet every magnificent tree in this lifetime!!! I can become like a kid in a candy store with this work.

The drawing was given clearly step by step without any hesitation . As it was building I had no sense of an over all image, it developed from the centre, then moved to the foundation which built up in rainbow colours ( a sign to me that this particular tree is participating in the world tree network) then up to the very top. I worked steadily and held open a space of question.

What is the new agreement for this time, for the future ?  2015, is the 800th anniversary of the signing of the Magna Carta . Even in Canada the event will be commemorated. An original copy of the Magna Carta will be carried on a walking trip across Canada intending to show how this document has impacted the nation right up until today.

After 40 minutes of receptive listening and drawing I looked at the picture and saw that  eyes of a lion were faintly suggested.  I noticed them and brought them out. (Upon finishing I realized that the next step in the tree conversation work will be to have video footage of the emergence of the drawings. The way they build up , is in itself, a communication and a revelation. I am working on that for the future. When I have some I will post them on the website.)

The group of the five of us gathered together and sat near the trunk. We shared what we had experienced during our inner meditation and communion with the tree. There were some powerful images and thoughts that came forward.

The trees, especially these truly ancient ones, in particular in Britain, are offering a new imagination for social agreements. They wish to be included in the creation of new constitutions. (Some countries, such as Bolivia , are including the legal rights of the landscape in their constitution). Others are including protecting animal as sentient beings with legal standing.

The imagination of new structures include a combination of horizontal, community agreements that are created in the communities themselves ( see choosing structures as an example). These agreements include consulting/collaborating with the landscape and living beings on the land. The idea of property ownership changes and stewardship along with rights and responsibilities replaces and/or is along side ownership ( see sharing economies: Jeremy Rifkin’s book: The Zero Marginal Cost society). The different age groups are interrelating and mutually supporting.

The images/ideas were preliminary basing use of resources in order to build up connectedness between people and the earth. This tree was asking that we continue to research and perhaps return for a deeper investigation in the future. 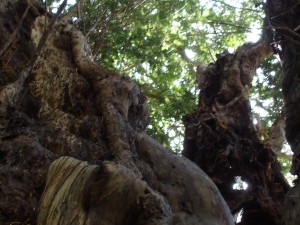 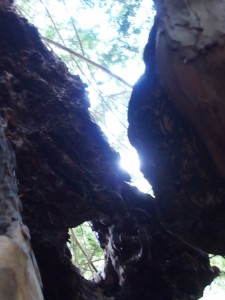 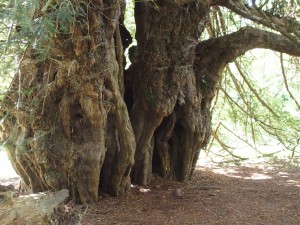 If you are interested in reading more about this tree, there have been books written on just this tree! And a wikipedia article.