The Tree of Life: Trees from my past. The butterfly tree.

If I trace my research into communications with trees I remember a time,  (1988) when I lived on Salt Spring Island. We were in a house overlooking an inlet where a pod of orcas swam by on their way north. If I walked on a path along the water’s edge I came to a tree. It was an Arbutus tree. The name “Arbutus” means ‘tree’ in Latin. These trees are unique to the region known as the Gulf Islands. Each one takes on a form and highly individual expression . Their trunks can turn and twist and curve – they can be wide but they can also be slender. Their bark will appear in one of three phases:

1. a plain rough grey
2. peeling layers of peach-orange, rust and burgundy – as if paper had been curled and attached to the trunk and
3. silky smooth reddish orange pink on naked wood – It shines when wet as if glistening moisture on skin!! 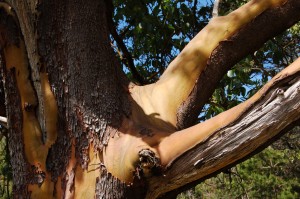 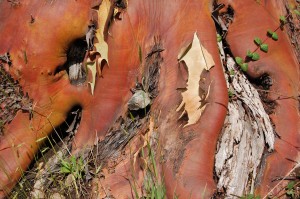 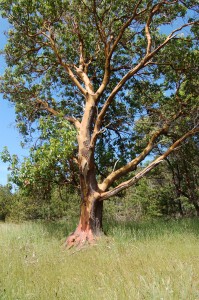 The tree I befriended had one limb that grew almost horizontally (with graceful curves rippling along the length of the branch extending out towards the water) .It stretched from the huge trunk on the land – out past a cliff edge which plummeted down towards rocks and waves. There was one particular curve that embraced my form perfectly so I could sit with total ease and comfort for long stretches of time.
Arbutus Tree-Hornby Island

What was particularly wonderful about this is that my hips and pelvic region are not symmetrical but oddly formed around a chronic hip injury (my right femur sits halfway out of the socket and my right leg is shorter than the other). When riding a bicycle I have to adjust my imperfect form in awkward ways. But here, in the arms of my beloved Arbutus tree I was perfectly at home. This time in my life I was seldom away from my one-year-old son. From time to time I would reach a limit and would ask to go out for a solo walk – or perhaps I was sent out?! And I would go to this tree. I would sit quietly reflecting on my life perched halfway between heaven and earth.

At some point I noticed there was an exchange taking place. A friendship had developed so that when we moved away I said a tearful goodbye to that tree and inwardly from time to time my soul flies into the unconditional embrace of this dearly beloved tree friend.

If I trace even further back in my life I realize that both my father and my mother established close connections with trees near our homes – and for several years we lived in a house which backed onto the steep slopes of a ravine. A cluster of 5 mature red maple trees stood next to the house and my parents had a balcony built off a second-floor bedroom so my mother – who was ill and bedridden – could be outside in nature. It was this group of trees who became, magically and suddenly orange overnight in September one year… It was a monarch butterfly tree!!