I returned a year later to both the Pan tree and it’s acacia guardian tree . I began with the “attendant” or guardian tree and a rich and beautiful image came through that encounter- a kind of fulfillment of the image that came through a year earlier with that same tree – a grail with the aspect of the rainbow present. I felt that the tree was part of the “Radio Rainbow” global network of communication. I also went back to the Pan tree and it was simply a messy, wet experience out of which the first page had to be destroyed. I began again. 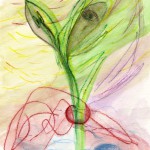 I persisted with the Pan tree and there was a kind of repetition of the first year’s image arising… I wondered if it was possible to deepen the relationship with this kind of being or was it actually that this image is simply IS a visual presence of Pan, consistently, always the same, showing itself in the same way? Perhaps it was the kind of conversation with an individual who is able and willing to express their own ideas but are not interesting in an interaction or conversation in order to develop new ideas. I did return a third year in a row to this same place although I only worked with the acacia tree on that third visit.

It was absolutely fascinating to notice that there had been a new structure built near these two trees. There many other locations where this play structure could have been constructed. These two trees that I worked with are part of large park/forest at the top of the hill overlooking Ljubljana where the castle stands and there are numerous walking paths and benches etc. I felt that this place had been chosen, whether consciously or unconsciously because of the playful spirit of Pan, living in the tree and present there!!!