Mijas Spain: Increasing discernment between function of a tree and personality of a tree

Mijas Spain: Increasing discernment between function of a tree and personality of a tree

I arrived in Spain. I was following my dream to learn copper etching. I would study every day for five days with a Danish printmaker in her studio Mijas.

I was met at the airport by an Ex-Pat American. As we drove towards Mijas what I noticed immediately were the Trees! In the round- abouts the city had transplanted mature olive trees. Each day I was in the studio for five hours and was free for the rest of the day. I began walking around town and towards the outskirts in search of trees to work with. I was rewarded with encounters with many mature trees of varieties that are unique to Southern regions. 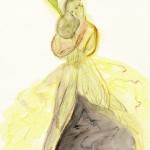 The Second Conversation with the Olive Tree in Mijas: Personality of the Tree

I worked with Olive, Fig, Carob trees and also some kind of Pine during my visit. Daylight hours were long and there were interesting trees within an hour’s walk of the centre of town.

I was told about one ancient olive tree that had been left when the highway was built through an ancient grove. I walked right up to it and sat down on the sidewalk. It had been squeezed into a tiny space between the cement sidewalk and a tall wall built for a private home. A steep cliff opposed the street where I imagined, on the sloping hillside there had been an ancient olive grove. This tree had a plaque with a number- a municipal heritage tree with its measurements. The number #16 suggested there were at least other 15 trees but my inquiries at the tourist information office proved fruitless as they had no idea what I was talking about.

When I began the conversation I had an experience of light – and I drew rays of yellow. An image of crystals came next-beneath the roots and then the emanating rainbows followed. I let myself enjoy the process of witnessing this clarity, simplicity and light. After working for about half an hour I prepared to put all my pencils and paper away.I paused and wondering why I hesitated, I suddenly decided to take a new sheet of paper and I began a second “conversation”. This time the palette and the mood were entirely different. It became clear that there were figures developing with a distinct personality, quite different than the mood of the first drawing which was clear and crisp.

This second drawing was sweet, warm, sensuous and tormented or agitated in some way. Also there seemed to be two figures bound together. I packed up my work and walked back to the pensione. Looking at the two drawings side by side I had the thought that the first image of clear luminous yellow was the “job” or function the tree was serving in the landscape. The second was the “personality” or “individual” face of the tree spirit living within the tree. Just as you or I might have a “job” we do as a teacher, doctor, taxi driver or welder etc and then at home we dance or write or cook or garden. We also have a “personal” life. This woke me up to the thought that if I could I would love to do two and perhaps more “conversation” drawings with each tree.