May 21 2015 Oak Central Park, New York, Unable to work with the Beech from previous year. This tree witnesses a lot of large outdoor birthday parties. There was a theme party with very small children on….she has seen it all!!

May 21 2015 American Elm Central Park, New York Near a soccer field. Entitlement/privilege/ oblivious to the trees. Although a young man who lost his hat sings a song he created on the spot for me and three! Sweet.

May 21 2015 American Elm Central Park, New York Just north of the Met. A small valley with several large trees. This one adorned with blue chalk. Children playing joyfully on the grass. Tree connecting with the mission of the Metropolitan Museum

May 21 2015 Gingko Central Park, New York One of a foursome of mature trees just north of the Met. Lovers seem to be drawn to this tree. Also connected with the mission of the Met.

May 21 2015 Buttonwood Sycamore Central Park New York One of a group of four mature trees just north of the Met. Also connected with the mission of the Met. Also part of the mood of real joy in this little area.

May 23 2015 ? Tree conversation while group was working in Central Park but I don’t know the kind of tree or where it was.

I was in Central Park in May 2015. For a few days before a group of us went with Marko Pogacnik to do a new group work together. Some of these drawings were done with the luxury of time to sink into the conversation. Some were done on the fly trying to keep up with the group. My love and admiration and GRATITUDE for the trees in Central park grows with each visit.

New Yorkers come into the park, almost live in it. Their private spaces are cramped and limiting. Central Park is a doorway into a refreshing , imaginative, inspiring space. It is luxurious and generous. However you enter, when you leave you are refreshed, inspired and more hopeful. It is medicine. It is also a place where human beings and nature are meeting and in some cases , co-creating.

The time will come when New York will be built up, when all the grading and filling will be done, and when the picturesquely-varied, rocky formations of the island will have been converted into formations for rows of monotonous straight streets, and piles of erect buildings. There will be no suggestion left of its present varied surface, with the single exception of the few acres contained in the Park. Then the priceless value of the present picturesque outlines of the ground will be more distinctly perceived…It therefore seems desirable to interfere with its easy undulating outlines, and picturesque, rocky scenery as little as possible.

Central Park was always supposed to answer to both arcadian myths that have survived in the modern memory: the wild and the cultivated; the place of unpredictable exhilaration and the place of bucolic rest. Olmstead could have had no inkling , of course, how the very features that made his park unique-the sunken roads, the gullies and hollows that closed off views to the streets-would shelter a savagery at which even Pan himself might have flinched. The woods and trails of Upper Manhattan are certainly not only lair where ancient myths and demons, best forgotten, or left to academic seminars, have returned to haunt the modern polis. In fact Central Park divides its arcadian life by the hours of the clock. By at night it reverts to a more archaic place, the realm of Pelasgus where the wolf-men of Lykaon prowl, satyrs bide their time unsmiling, and feral men, hungry for wilding , postpone their music.

This excerpt which includes the words of Olmstead himself and also the commentary by Simon Schama the author of the book Landscape and Memory gives an valuable introduction to my work with the trees of Central Park.

The tree who showed me its tender and protective face and gesture is an oak that grows in the middle of the paved path, north of the Met and on the west side of a large reservoir. All the trees in Central Park are fortunate to have each other…in other words there are areas that you could call woods. And they grow in a pillar of focused, uninterrupted landscape. The earth below is not disturbed by the movement of the subway. The sky above is free of buildings. The pressure on all sides of the park of the city with it’s physical structures and psychic/psychological intensity creates the space which focuses the powerful presence and aliveness. There are still nature beings frolicking in this urban setting. 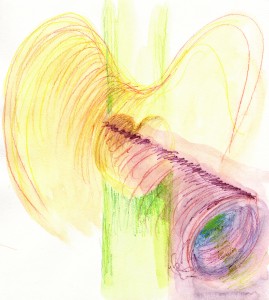 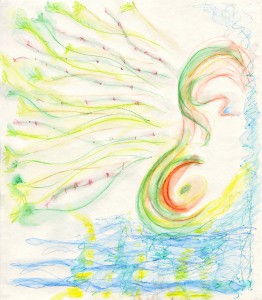 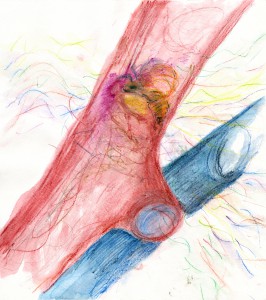 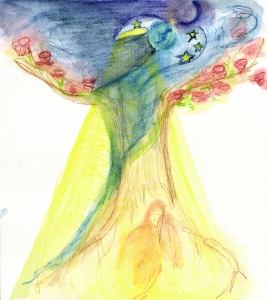